The Bronze, Silver and Gold of SEO and Digital Marketing

The way in which websites are built, maintained and marketed has changed dramatically in a short period of time, mainly due to the prevalence of the internet in our culture and the way in which we use the world wide web to socialise, to sell and to buy – and this has had a knock-on effect for the way in which Search Engine Optimisation has played a part in proceedings.  In fact, if you’re after a winning website, SEO can hardly be ignored as a willing and effective coach.

The way in which some companies and IT experts have treated SEO as a whole has evolved over the past few years by something of an upgrade – it is bizarre to think that, ten years ago, it was barely leaving the starting gates for some professionals – but the way in which Google has changed its algorithms has meant that the process has risen up through the ranks to become one of the top components of online success – in fact, it has a place on the podium.

Everyone has to start somewhere – and while SEO may once have been regarded as the bronze medal-winner of web design, it still remained an essential part of a website’s team. Gone are the days of throwing content together and expecting fans to come flocking – old-school SEO was more focused on using keywords, and plenty of them.  This meant that some websites were able to get ahead of the race by stuffing irrelevant phrases and blocks of text into their web pages to get out in front.  Thankfully, this is no longer seen as being particularly fair, meaning that there is now more room than ever for true, effective, organic SEO on the podium.

SEO’s bronze-medal status largely came about due to the way in which it was treated as part of the web design package – early web design would care more about visuals and functionality than offer equal time and opportunity to content and optimisation. Google was a long way from being the search engine behemoth that it is today, and therefore a few years away from being able to effectively write and set the algorithms for all websites to compete by.  As Google’s influence grew, so would SEO’s importance.

The Bronze, Silver and Gold of SEO and Digital Marketing

Today, while SEO is regarded with much more importance – less of a luxury and more of an essential component – it is an area which many are still not entirely sure how to tackle.  With every Google algorithm update, the rules and the effectiveness of SEO change – meaning that, right here and now, it is still playing silver medal fiddle to other website components that are receiving adulation from the crowd.  Understanding SEO in its current situation can be tricky – but there is an abundance of thought on how to harness its power and how to make its core principles work for you.

The rise of SEO up the ranks has come about during the mobile revolution – as more and more internet users move away from desktop PCs and laptops to browse tablets and smartphones on a regular basis.  This change prompted Google to offer websites favourability if they offered mobile optimisation – meaning that, yet again, the rules of SEO changed. While the finish line may have moved, SEO’s stamina hasn’t.

Some are quick to dismiss SEO to be an outdated premise, that it may be time for its principles to retire – but there is considerable evidence to prove that Google, more than ever, is willing to work hand-in-hand with the techniques that SEO stands by.  Google loves organic content – and to get from bronze to silver, SEO has faced considerable re-training.  Keywords are just as important as they have ever been, but now, websites need to offer genuinely engaging and effective content – gone are the days of stuffing text full of stock phrases. Google actively disqualifies such websites – meaning that those still believing SEO is a bronze winner at best will likely find themselves lagging at the back of the pack. 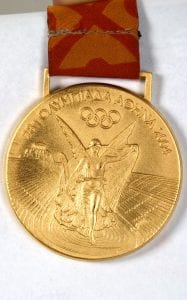 What next for SEO?  The only way is up – and there certainly wouldn’t be an industry built around its core principles if there wasn’t confidence in its continued influence over website success. SEO has had to adapt and to train differently to be able to get to where it is – and it’s stronger than ever – meaning that for SEO to be the single most important facet of a website and its potential success, it needs to be appreciated more as an essential facet of all web design.  There may well still be occasions where companies treat optimisation as an afterthought, or with even less regard should further algorithms come to pass.

The fact is, SEO will need to be ready to adapt once again if it ever wants to be a gold medallist.  SEO has been around the track and has played the field since web design first got started – and many of us feel it deserves the recognition it is starting to get – but with Google ready to move goalposts at any given moment, the rules of optimisation need to remain flexible.  Further to this, SEO professionals need to be ready to relearn their game entirely if they want to be part of a winning team – this much is true.

There is still considerable scope for SEO and professionals such as ours working at SEO CoPilot are keen to help small to medium enterprises get seen on the internet by way of tried and tested techniques. Google is still keen to offer SEO-rich websites the best slots in its rankings, and the game has altered so that organic and genuinely effective websites grab the top spots on the podium.

Looking for a medal-winning website that gets peak attention from the audience you’re looking to entertain? SEO CoPilot will be your coach.  Call us today on 01246 540869 or email us via our web form – and together we can work as a team deserving of all the glory optimisation will bring you.